This is part of my ongoing series on Educational Preparation for BCG Certification. It is not limited to those interested in certification, but provides ideas for any interested genealogist. There are links to the other posts in the series at the bottom of this article.

Note: One of the recommendations in part 2 of this article (which will be posted next Monday), is time sensitive so will be included here. Tomorrow, Tuesday, February 16th, there is a free webinar hosted by the Board for Certification of Genealogists.

Description: Source citations provide context for the information we gather. Was the death date from a tombstone, a newspaper obituary, a county history, a Bible record, or a death certificate? The best citations tell us that the tombstone was contemporary with the death, the Bible record was entered in the same hand and the same ink, the county history was written a hundred and fifty years later, and the death certificate was signed by an attending physician. The details provide background context that helps us evaluate the validity of the information and suggests other avenues for research. But this information only scratches the surface. A full evaluation of any record’s context requires that we explore the complete content of the document. We want to know the reason for the document’s existence; the social, legal, and geographical context behind its creation; and what ancillary documents were produced both before and after its creation. 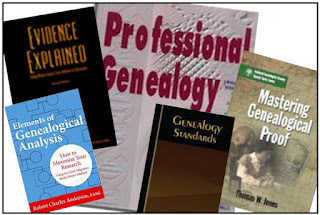 
This week our focus is on understanding and applying the second element of the Genealogical Proof Standard, “tests—through processes of analysis and correlation—of all sources, information items, and evidence.” This topic is broader than others we have discussed in this series. I will highlight some of the options I have found for studying evidence analysis and correlation, and I hope others will share their suggestions in the comments.

“As history researchers we do not speculate. We test. We critically observe and carefully record. Then we weigh the accumulated evidence, analyzing the individual parts as well as the whole.” (Evidence Explained, page 15)

She continues on to list the important considerations in conducting analysis of genealogical records and the evidence they contain, including the classes of evidence, the quality of the evidence, and points to consider in your analysis.

Dr. Jones points out that “we analyze one source at a time,” and provides tests for analyzing the source and the information. Once we have analyzed each source we compare them to see what evidence agrees, and where we may have conflicts. This chapter contains examples of analysis and correlation in the figures and tables provided, and then exercises for you to practice these skills.

3 - Review chapter 4 on “Standards for Researching” in Genealogy Standards: 50th Anniversary Edition by the Board for Certification of Genealogists (Nashville: Ancestry, 2014). This chapter contains standards #35 through #47 for analyzing evidence, and particularly #35 on source analysis and #36 on information analysis. These are the standards by which BCG portfolio applications will be judged.

4 – Study chapter 17 on “Evidence Analysis” by Donn Devine in Professional Genealogy: A Manual for Researchers, Writers, Editors, Lecturers and Librarians edited by Elizabeth Shown Mills (Baltimore: Genealogical Publishing Company, 2001).  This chapter was written before the new 3 x 3 Evidence Process Map was produced (see the 2015 edition of Evidence Explained), but the principles in the chapter are sound. The questions about factors that point to the reliability, or unreliability, of evidence on page 337 are useful tools.

5 – You may also like to read Elements of Genealogical Analysis by Robert Charles Anderson (Boston: NEHGS, 2014). This book presents a step-by-step process for solving genealogical problems using source analysis, record analysis and linkage analysis. Anderson uses different terminology than the Board for Certification and Mastering Genealogical Proof, so don’t get confused, but his analysis techniques are sound.

6 -- As recommended in the post on citations, the EvidenceExplained.com website is an excellent resource. You will want to return often to read new posts in the forums, as well as new QuickLessons and blog posts. Here are a few of the ones most relevant to evidence analysis:

Evidence Explained Forums – a place for you to ask questions on evidence analysis issues as well as record usage and interpretation. You may want to read the archives.

QuickTips – the blog at EvidenceExplained.com. Start with these posts:
A Record Here ... A Record There ... Wow! A Match!
How To Solve a Research Problem
Analyzing Census Records: Context Matters!
Analyzing Records to Find Our Answers
Finding the 'Core Truth' in a Tradition
Analyzing Compiled Material "On the Fly"
Understanding What We Find
The Disciplined Researcher's 20-Question Guide

7 – Study the article “Working with Historical Evidence: Genealogical Principles and Standards” by Elizabeth Shown Mills from Evidence: A Special Issue of the National Genealogical Society Quarterly, 87 (September 1999): 165-184. It is available as a PDF file on Elizabeth’s website at http://historicpathways.com/download/workwthhistevidence.pdf

8 - Read the articles "The Importance of Genealogical Analysis and Correlation" (April 2015) and "The Great Mix-Up: Sources, Information, Evidence and Proof" (March 2015) by Melissa A. Johnson, CG in the NGS Monthly. Members of the National Genealogical Society can access the NGS Monthly at http://ngsmonthly.ngsgenealogy.org/

Part 2 of "Studying Evidence Analysis" with the formal study activities will be posted on Monday, February 22, 2016.

Note:
These are just ideas for you to add to your individual education plan as you choose. They are NOT meant to be a checklist where you have to read/study/participate in every option.


Studying the Art of Citation